The Ben 10 franchise is one of the most popular productions from Cartoon Network, with a fourteen-year run that’s spanned five iterations of the TV show, with the current one being a reboot of the first show. As one would expect of a multimedia franchise such as this, a litany of video game adaptations (of varying quality) have been made to accompany the shows, which brings us to Ben 10: Power Trip!. Clearly produced as a tie-in to the movie which saw a debut last week, Ben 10: Power Trip! cleanly fits the definition of ‘middling tie-in video game’. That is to say, it is aggressively okay, which can be both a good and bad thing.

The story begins with Ben, Gwen and their Grandpa Max taking a vacation through Europe, but their trip is quickly interrupted by the appearance of Hex, one of Ben’s alien nemeses. Hex somehow disables Ben’s ability to transform into different aliens and scatters their DNA samples across the region, thus forcing Ben to recover them so he can put a stop to Hex’s evil plan. Those of you hoping that Ben 10: Power Trip! would display some of the more mature, complex storytelling that the TV shows have been acclaimed for will be left wanting, as the plot in this release feels akin to a throwaway ‘bottle episode’ without much depth. This isn’t strictly a bad thing, but considering the narrative potential that a new Ben 10 video game could possess, it feels a bit too lacklustre. 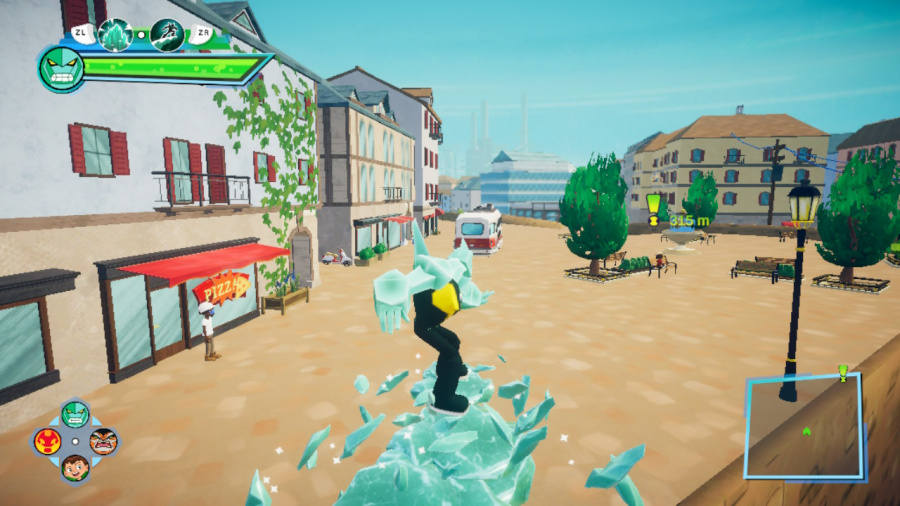 Gameplay takes the shape of an open-world action game with heavy platforming elements. As you explore the landscape, various NPCs will have quests and problems that can only be solved by Ben, the completion of which will reward him with money and upgrades for his combat abilities. Typically, these quests are designed around cliché RPG tropes, with fetch quests and extermination missions being the norm.

Case in point, in our first hour of playing, there were two quests within a few minutes of each other that required Ben to find somebody’s lost cat. Other varieties included using Heatblast to get rid of a handful of mildly inconvenient snowdrifts in a snowy town, retrieving several bundles of firewood for Grandpa Max and infiltrating the main villain’s hotel room by entering an easily accessed window. Still, however inane the task may be, the simple loop of completing basic tasks in exchange for a small reward remains strong here, and it’s legitimately fun for a time to just go through the motions and clear out areas. 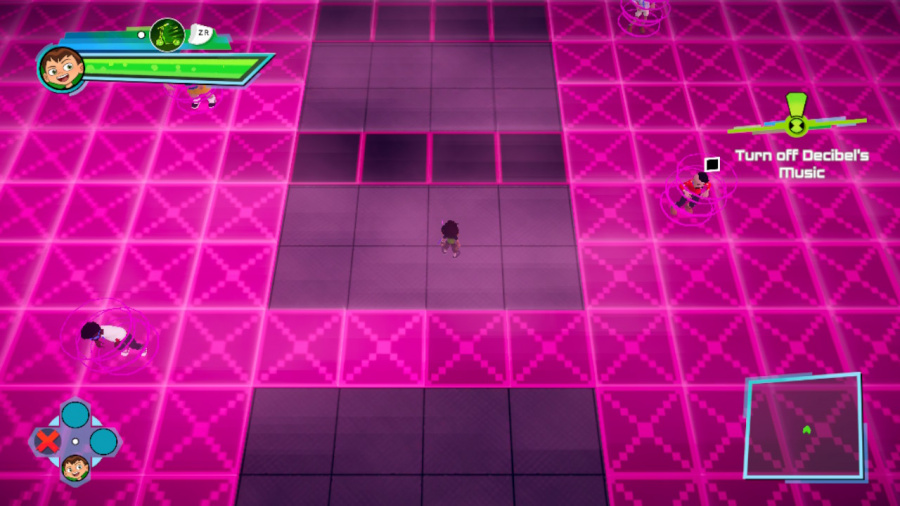 Though the quest objectives themselves aren’t all too fascinating, the monotonous activities are held together by the surprisingly enjoyable controls. Ben has a handful of aliens that he slowly unlocks and each one has a unique move set with application in both exploration and combat settings. Rath, for example, can deftly climb pre-marked parkour routes, while Diamondhead can surf around, Frozone-style, to get across long gaps. None of the abilities are difficult to use or particularly deep, but the way in which the levels gently require you to switch up your aliens can make for some nicely varied gameplay. It certainly would’ve been nice to have seen more aliens on display, but Outright Games has struck a nice balance here in terms of the ability sets; no two aliens feel like they overlap too much.

When you’re not busy clambering up a cliff searching for somebody’s cat, you’re usually entangled in a skirmish with some monsters, which put up minimal resistance. This is where the light beat ‘em up mechanics of Ben 10: Power Trip! come into play, with each alien having a mixture of light and heavy attacks that can be combed together, along with some extra superpower that helps them stick out. These fighting mechanics are fine, if not a bit shallow, but the gameplay is significantly hindered by the lack of a lock-on button for targeting specific enemies. We had quite a few instances where combo attacks would miss because the enemy moved too much out of the way, which can be frustrating. 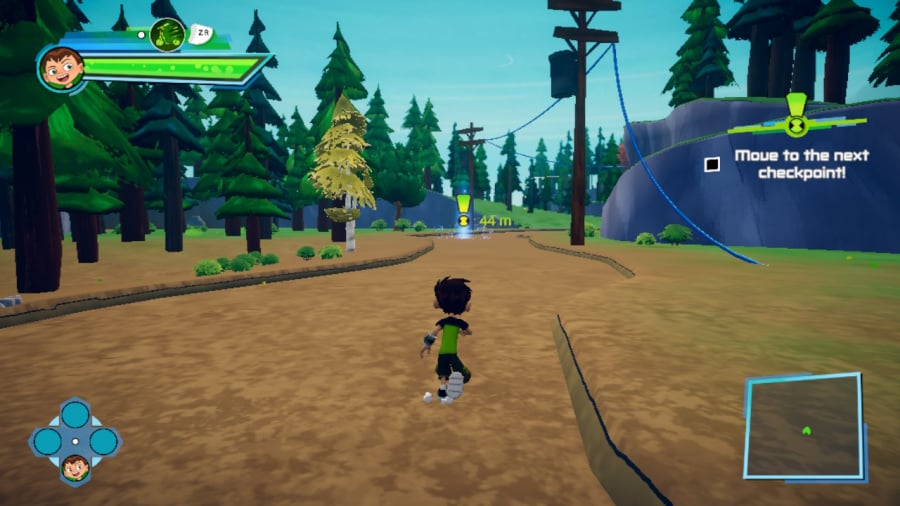 If you haven’t picked up on it yet, there’s a clear line of oversimplicity which permeates all the game systems of Ben 10: Power Trip!. It’s an open-world game, but it lacks interesting quest design. It’s a platformer, but it lacks challenge. It’s a brawler, but it lacks depth. The key thing to bear in mind for all this, however, is that the target demographic of this release is the elementary school age children that watch the show over on Cartoon Network.

Its simplistic design, then, seems not to be one that stems from laziness or ineptitude, but from a concerted effort to produce a game which can be easily accessed and interacted with by that core demographic. That being said, it does still feel like Ben 10: Power Trip! could’ve been much more than it is, as there are plenty of kid-friendly games out there which also feature legitimately solid game design. It feels like Ben 10: Power Trip! was rushed to meet the release date of the new movie, and while the final product is perfectly fine, it also reeks of wasted potential.

The presentation is where Ben 10: Power Trip! unfortunately drops the ball; it’s satisfactory at best and bad at the worst. To the developer’s credit, the art style remains faithfully consistent with that of the reboot show, but NPC characters are often uninspired and plain-looking, feeling more like wooden set pieces than actual people. A similar sentiment extends to the environments, which have a plasticky, fake look to them that feels rather inauthentic. All of this is displayed at a low resolution with seemingly no anti-aliasing, which gives all the models a jagged ‘stair-stepping’ look around their edges that looks harsh. 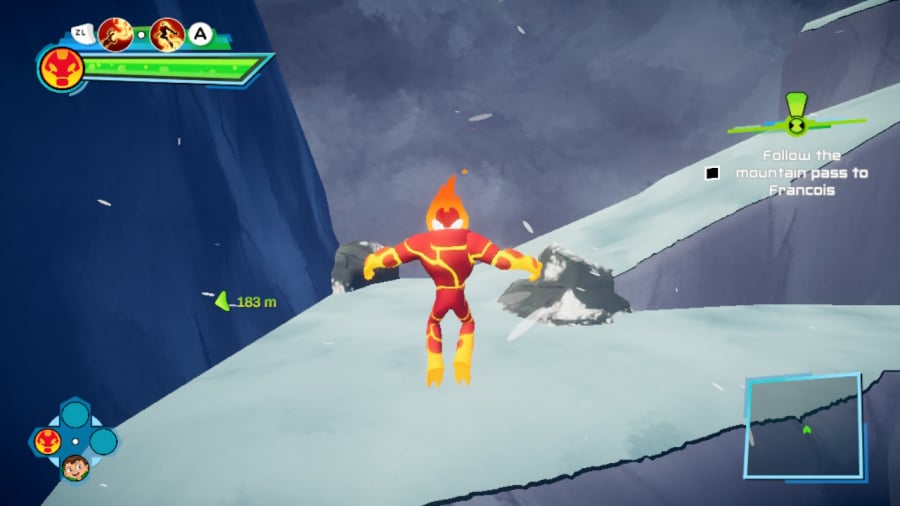 That might’ve been forgivable if the framerate was at least good, but you’re looking at a sub-20 FPS experience here that oscillates wildly depending on the scenario. To be fair, there are moments where it almost seems to be approaching 60 FPS, but such occurrences are extremely rare. Add another player in for the tacked-on co-op, and things only get worse. All of this is then capped off with the glitches, the worst of which resulted in a few instances where our game crashed and progress was lost. To put it simply, Ben 10: Power Trip! is a performance wreck on the Switch, and while it’s far from unplayable, it’s also far from polished.

It’s difficult to score a release such as Ben 10: Power Trip!, as it belongs to a unique class of games that are known for being half-baked and it’s primarily marketed towards children. As far as tie-in games go, Ben 10: Power Trip! is pretty decent. The character variety makes for some nicely varied control styles, while the open-world design allows for a strong gameplay loop centred around chasing quest. That said, Ben 10: Power Trip! also has several glaring flaws – like shallow gameplay and poor performance – that really sink its image. If your child happens to be a fan of the show, Ben 10: Power Trip! has enough redeeming qualities to be worth the punt, but we’d advise everyone else to take a pass.

You Can Pet A Dog Until It Fights On Your Side In Ghost Of Tsushima: Legends

How to Heal & Revive Teammates