Over A Third Of Devs Still Interested In Making Switch Games, According To GDC Survey

Ahead of the annual Games Developer Conference this March, GDC has released its ‘State of the Game’ survey results for 2023, and there are plenty of stats that might interest Switch owners. This annual survey, which you can get a copy of from GDC’s website, gives us an insight into the current state of the game industry.

For this year’s survey, GDC spoke to over 2,300 game developers, and there are a few interesting things to note. One is that more game developers now work for independent studios rather than AAA. 39% of the devs surveyed currently work for an indie game company, while 23% work for a AAA developer. Most surveyed have been working in the industry for “10 years or less” — 57% in fact.

Looking at Switch stats specifically, with the console approaching its sixth anniversary, and according to a poll by GDC, 35% of game developers are still interested in developing games for the Switch. This is just behind the PlayStation 5 (46%) and the PC (64%). 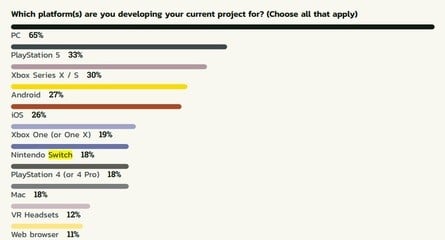 Of the 35%, 18% of those surveyed are currently making a game for the console. This puts the Switch behind the Xbox One and the iOS and Android, including all current consoles. The Switch has a pretty big swathe of games coming out in 2023 from multiple indie and third-party developers, and while we don’t know much beyond the summer, it looks like it’s still going to be a good year for the console. Although some of the 18% could still be a year away.

It’s a similar story for the console when it comes to developers’ next projects. According to the survey results, 19% of developers will be working on a Switch game next, which is again behind mobile platforms and current consoles. The PC comes out on both of these polls again — 65% of devs are currently making a game for PC, while 57% will be making a PC game as their next project.

Other responses within the survey highlight some of the bigger talking points across the industry over the last 12 months. The metaverse has been a dominant point of discussion, particularly with Fortnite and Minecraft working towards this. 45% of those polled believe that the metaverse just won’t take off. And despite companies like Square Enix branching out into NFTs and blockchain, overall interest in the technology didn’t grow in the past year. 75% of those surveyed have no interest in blockchain at all.

Over a page has been dedicated to the increase in accessibility in games — 37% of currently in-development games have accessibility modes, while many are focusing on adding colourblind modes, remappable controls, closed captions, and motion sickness settings.

Working hours and crunch culture continue to be a big issue, and the GDC survey reveals that while the majority of those polled (29%) say they work a 36-40 hour week, many developers work over that — and 4% of those surveyed work over 60 hours a week.

What do you make of the Switch responses in the survey? Let us know!

Round Up: The Reviews Are In For Persona 3 Portable, Persona 4 Golden On Switch